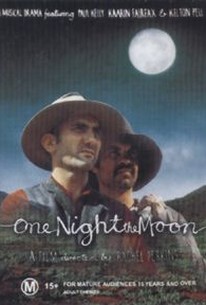 One Night the Moon

One Night the Moon Photos

Australian singer and songwriter Paul Kelly stars in (and wrote part of the musical score for) this unusual musical, which combines folk and country influences with the aboriginal sounds of the Outback to tell the story of a lost child and the divergent efforts to find her. A simple farmer (Paul Kelly) and his wife (Kaarin Fairfax) are the proud parents of a beautiful little girl (Memphis Kelly). One night, Father tells the girl a bedtime story in which dreamers answer the siren song of the moon; fascinated by the story, the restless girl wanders out of the house in the night to follow the moon, and in the morning her parents discover she is gone. After the father reports his daughter missing, the authorities put together a search party, including Albert (Kelton Pell), an Aborigine police offer with remarkable tracking abilities. The farmer, however, is a prejudiced man, and objects to having a black man on the search team, no matter what his abilities may be. Offended, Albert leaves the police force behind, and sets out to find the girl on his own; soon, the girl's mother joins him, convinced that Albert's knowledge is more valuable than her husband's ignorance. Produced for Australian television, One Night the Moon received its American premier at the 2002 Sundance Film Festival. ~ Mark Deming, Rovi

David Field
as Allman
View All

Critic Reviews for One Night the Moon

Audience Reviews for One Night the Moon

There are no featured audience reviews for One Night the Moon at this time.

One Night the Moon Quotes