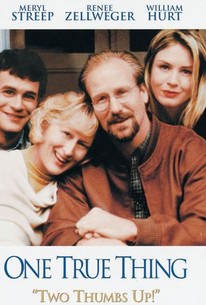 Solid performances lift this drama to a higher level.

Carl Franklin directed this family drama adapted from the 1995 novel by former New York Times columnist Anna Quindlen about a young woman who goes back home to take care of her dying mother. In 1987-88, independent Ellen Gulden (Renee Zellweger), a Harvard grad, is working on a New York Magazine investigative article when she hears from her father, George (William Hurt), a literary critic and university professor. He tells Ellen she's needed at home to care for her mother, Kate (Meryl Streep), who's due for surgery. Ellen needs to get away from the problems of her relationship with her boyfriend Jordan (Nicky Katt), but she plans to continue work on the magazine article from home. In truth, Ellen is uncomfortable with her mother's various ladies club lunches, and holiday preparations, and she finds communication with her mother awkward. Once Ellen arrives back home, she's dismayed to find herself caught in the web of her mother's Middle America activities. Ellen's attitude changes when it becomes apparent this probably will be the final Thanksgiving and Christmas with all family members present. But tensions erupt as long-buried family secrets emerge. Locations in New Jersey were used to create the film's Eastern coastal college town. Shown at the 1998 Montreal Film Festival. ~ Bhob Stewart, Rovi

Gerrit Graham
as Oliver Most

News & Interviews for One True Thing

Critic Reviews for One True Thing

Audience Reviews for One True Thing