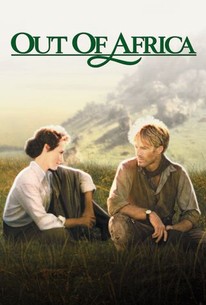 Though lensed with stunning cinematography and featuring a pair of winning performances from Meryl Streep and Robert Redford, Out of Africa suffers from excessive length and glacial pacing.

Out of Africa Ratings & Reviews Explanation

Out of Africa Photos

Out of Africa is drawn from the life and writings of Danish author Isak Dinesen, who during the time that the film's events occured was known by her married name, Karen Blixen-Flecke. For convenience's sake, Karen (Meryl Streep) has married Baron Bor Blixen-Flecke (Klaus Maria Brandauer). In 1914, the Baron moves himself and his wife to a plantation in Nairobi, then leaves Karen to her own devices as he returns to his womanizing and drinking. Soon, Karen has fallen in love with charming white hunter Denys Finch Hatton (Robert Redford), who prefers a no-strings relationship. A woman who prides herself on her independence, Blixen finds herself unhappily in thrall to a aloof man -- and doubly unhappy for living out such a cliché situation. Although Redford received a lion's share of criticism for his too-American performance, Streep has rarely been better, and the film's perfectly measured pace is offset by David Watkin's stunning location photography. The movie was nominated for 11 Academy Awards and won 7, including Best Picture, Best Director for Sydney Pollack, Best Adapted Screenplay for Kurt Luedtke, and Best Cinematography for Watkin. ~ Hal Erickson, Rovi

Stephen B. Grimes
as 2nd Commissioner

Mike A. Burgos
as Juma

Critic Reviews for Out of Africa

Audience Reviews for Out of Africa

Out of Africa Quotes