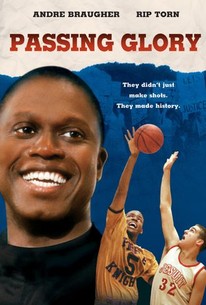 Set in the institutionally segregated New Orleans of 1965, the made-for-cable Passing Glory is the story of black priest Father Joseph Verrett (Andre Braugher) and his efforts to arrange the first integrated high-school basketball game in the city's history. Against the wishes of trepid white parish leader Father Robert Grant (Rip Torn), Fr. Verrett encourages the team members of the all-black -- and undefeated -- St. Augustine High School basketball team to prepare to play the equally successful all-white team of Jesuit Prep. Throughout it all, Fr. Verrett must learn to curb his own impatience over the racial status quo, and to keep his own faith afloat. Although some of the scenes are drawn in broad, unsubtle strokes -- especially those involving the bigoted father of Jesuit Prep's best player -- the film is thoroughly credible, right down to the last-second winning basket. Earning extra points for having its heart in the right place, Passing Glory made its TNT cable network bow on February 21, 1999.

Khaz B.
as Boo

Bill Erwin
as The Archbishop

Shawn Shepard
as Rod
View All

There are no featured audience reviews for Passing Glory at this time.