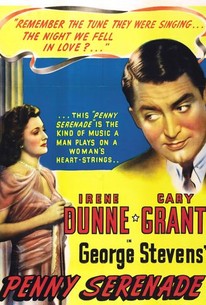 While listening to a recording of "Penny Serenade," Julie Gardiner Adams (Irene Dunne) begins reflecting on her past. She recalls her near-impulsive marriage to newspaper reporter Roger Adams (Cary Grant), which begins on a deliriously happy note but turns out to be fraught with tragedy. While honeymooning in Japan, Julie and Roger are trapped in the 1923 earthquake, which results in her miscarriage and subsequent incapability to bear children. Upon their return to America, Roger becomes editor of a small-town newspaper, just scraping by financially. Despite their depleted resources, Julie and Roger want desperately to adopt a child. It seems hopeless until kindly adoption agency head Miss Oliver (Beulah Bondi) helps smooth their path. Alas, their happiness is once more short-lived: their new daughter, Trina (Eva Lee Kuney), succumbs to a sudden illness at the age of six. Reduced to hopelessness, Julie and Roger decide to dissolve their marriage, but Miss Oliver once more comes to the rescue. Sentimental in the extreme, Penny Serenade is also enormously effective, balancing moments of heartbreaking pathos with uproarious laughter. Only director George Stevens could have handled a scene with a copiously weeping Cary Grant without inducing discomfort or embarrassment in the audience. Since lapsing into the public domain in 1968 (though released by Columbia, the film was owned by Stevens' production firm), Penny Serenade has become almost as ubiquitous a cable-TV presence as It's a Wonderful Life.

Otto Han
as Sam the Cook

Albert Butterfield
as Boy
View All