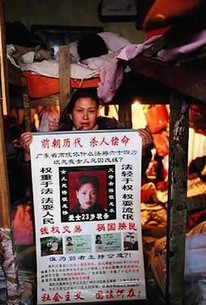 The last decade has brought an extraordinary wave of remarkable documentaries from China, many of them revealing the social and political transformations thathave occurred as the country has become an economic giant, and that have often taken a grave toll on the lives of its citizens. PETITION, filmed over the course of more than 10 years, is among the very finest of these often heroic attempts to bear witness. Since 1996, Zhao has documented the 'petitioners' who come from all over China to make complaints in Beijing about abuses committed by their local authorities. Gathered near the complaint offices, living in most cases in makeshift shelters, the complainants wait for months or years to obtain justice. Peasants thrown off their land, workers from factories which have gone into liquidation, small homeowners who have seen their houses demolished but received no compensation, they pursue justice with unceasingstubbornness, facing the most brutal intimidation and most often finding that their hopes are in vain. Unfolding like a novel by Zola or Dickens, but with the existential absurdity of Beckett, PETITION reveals the persistent contradictions of China in the midst of powerful economic expansion. --© Anthology Archives

There are no featured audience reviews for Petition at this time.