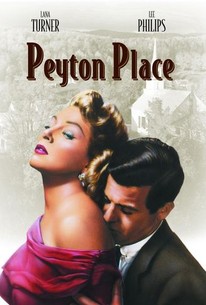 Grace Metalious' once-notorious bestseller Peyton Place is given a lavish -- and necessarily toned-down -- film treatment in this deluxe 20th Century-Fox production. Set during WWII, the film concentrates on several denizens of the outwardly respectable New England community of Peyton Place. Top-billed Lana Turner plays shopkeeper Constance McKenzie, who tries to make up for a past indiscretion -- which resulted in her illegitimate daughter Allison (Diane Varsi) -- by adopting a chaste, prudish attitude towards all things sexual. In spite of herself, Constance can't help but be attracted to handsome new teacher Michael Rossi (Lee Philips). Meanwhile, the restless Allison, who'd like to be as footloose and fancy-free as the town's "fast girl" Betty Anderson (Terry Moore), falls sincerely in love with mixed-up mama's boy Norman Page (Russ Tamblyn). And while all this is going on, "white trash" Selena Cross (Hope Lange) is raped by her stepfather, drunken school caretaker Lucas Cross (Arthur Kennedy). Other characters essential to the action are wealthy Rodney Harrington (Barry Coe), who must pay the price for his dalliance with Betty Anderson; Nellie Cross (Betty Field), Selena's long-suffering mother; and the town's Voice of Reason, Dr. Swain (Lloyd Nolan). This 166-minute soap opera (whittled down to 157 minutes before release) culminates in a spectacular murder trial which lays bare the deep, dark secrets of Peyton Place. Filmed on location in Camden, Maine, Peyton Place was a huge moneymaker (even those who felt that the film was but a heavily laundered shadow of the Metalious original were pleased with the professionalism of it all); it not only spawned a 1961 theatrical sequel, but also a long-running prime time TV serial. ~ Hal Erickson, Rovi

Michael Lally
as Bailiff
View All