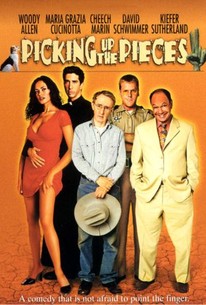 Picking Up the Pieces

A crime of passion unwittingly leads to a "miracle" in this satirical comedy. Tex (Woody Allen) is a butcher who is married to Candy (Sharon Stone), a former exotic dancer who has no skill or enthusiasm for fidelity. Unhappy with her extramarital affairs, Tex kills Candy while performing a "sawing the woman in half" trick with her during a magic show. Tex tries to bury the pieces of Candy's body on the outskirts of town before anyone can find out the trick was real, but he makes the mistake of losing one of Candy's hands along the way; a blind woman happens upon it, and when she can suddenly and miraculously see, she's convinced she's found the hand of the Holy Virgin. Father Jerome (David Schwimmer), the priest of the local Catholic church, isn't so sure, but the town's mayor (Cheech Marin) is more than happy to have hundreds of tourists coming into town to see a holy relic, and word of the miraculous hand spreads like wildfire. However, Sheriff Bobo (Kiefer Sutherland) is convinced the severed hand appeared through foul play, and Tex is eager to retrieve it before anyone finds out who was once attached to it. Picking Up the Pieces, which also features Fran Drescher, Eddie Griffin, Andy Dick, and Elliott Gould, had its American premiere on the Cinemax premium cable network after the film's controversial themes prevented it from getting a distribution deal with a U.S. studio.

Critic Reviews for Picking Up the Pieces

Audience Reviews for Picking Up the Pieces

Picking Up the Pieces Quotes