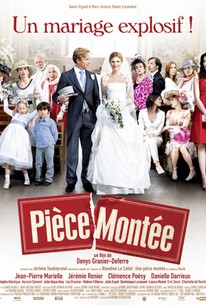 A fancy wedding brings out the worst in nearly everyone in this comedy from France. Vincent (Jermie Renier) and Berengere (Clemence Posey) are a handsome young couple from wealthy families who've decided to get married. The two are united in a small civil ceremony, but Berengere's grandmother Madeleine (Danielle Darrieux) insists on a church wedding, so several months later the couple are renewing their vows with a lavish event held at a chapel in the country. Madeleine insists that every detail be perfect, from the towering wedding cake to covering a statue in the church that she feels is in poor taste, but as the day wears on and the families and friends mingle, a few long-held secrets come to the surface and the "perfect day" falls far short of that benchmark. As their big day turns sour, Vincent and Berengere have to ask themselves if they're truly meant to be together for life after all despite their families. Piece Montee (aka The Wedding Cake) was the first feature film in a decade and a half from director Denys Granier-Deferre, who turned to television work after 1994's Coma. ~ Mark Deming, Rovi

There are no critic reviews yet for Pièce montée (The Wedding Cake). Keep checking Rotten Tomatoes for updates!

There are no featured audience reviews for Pièce montée (The Wedding Cake) at this time.