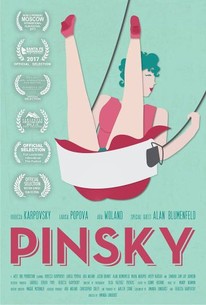 Sophia Pinsky seems like a functioning adult. But when she loses her girlfriend and her grandfather in the same day and moves back in with her authoritarian Russian grandmother, Marina, everything she thought she'd escaped is waiting to welcome her back with open arms. Thrilled to have Sophia under her influence again, and obsessed with finding her a proper (male) partner, Marina conspires to marry her off to Trevor, a nice Jewish boy Sophia has known since they were in diapers. After the date with him is a dud, Sophia finds her way to a weekly open mic night, where on a whim she gets on stage and discovers there's actually an audience for her Queer-Russian-Jewish-American sense of humor. Everything comes to a head at the family Shabbat dinner when Sophia and Trevor try to humiliate Marina by pretending to have fallen for each other, unaware that Marina is planning her own announcement: that she is already dating someone new--Sophia's childhood rabbi--a revelation that pits Sophia and her grandmother against each other in a struggle to define loyalty and love.

There are no featured audience reviews for Pinsky at this time.