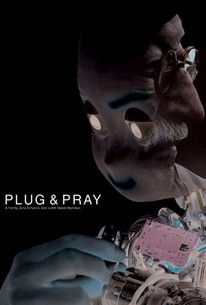 As electronic technology becomes more sophisticated, some inventors believe we are on track to crossing the final boundaries of human intelligence and creating robotic devices that can mimic the thoughts as well as the actions of human beings. But how far are we from creating robots that can act independently of the people that created them? And what are the advantages and problems that would result from such technology? Filmmaker Jens Schanze interviews some of the leading figures in robotics and artificial intelligence in the documentary Plug and Pray, which explores the mechanics as well as the ethics involved in this brave new world of science. Schanze's subjects range from Hiroshi Ishiguro, who has created a robot that not only looks like him but can copy his speech and movements, to Joseph Weizenbaum, an early proponent of artificial intelligence who now believes technology is taking us in dangerous and pointless directions. Plug and Pray received its world premiere at the 2010 Seattle International Film Festival. ~ Mark Deming, Rovi

There are no critic reviews yet for Plug & Pray. Keep checking Rotten Tomatoes for updates!

There are no featured audience reviews for Plug & Pray at this time.