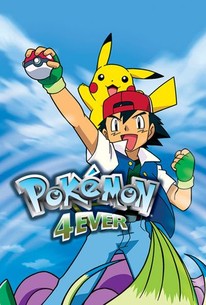 Only for diehard Pokemon fans.

The "pocket monsters" discover new friends and face off against new adversaries in this installment in the Pokemon animated series. Ash Ketchum (voice of Veronica Taylor), his loyal pet Pokemon Pikachu (voice of Ikue Ootani), and several of their friends travel to an island where an especially rare species of Pokemon, Celebi, is said to exist. With the help of friendly Diana and her Grandmother, Ash is able to capture Celebi, and discovers the creature has remarkable powers - bred to defend the forest and the wilderness, Celebi has the ability to travel through time. However, an especially villainous member of Team Rocket, Vicious, is soon after them, and Ash discovers the full extend of Celebi's powers - Vicious is actually a man from the future who has been sent back by Team Rocket trainers Jim and Jesse to battle Ash, while Diana and her Grandmother have also traveled through the years in order to protect Celebi and the forests. Pokemon 4-Ever was the fourth feature-length Pokemon adventure to receive theatrical release in the United States, though other Pokemon features found an audience on home video in America in the meantime.

Critic Reviews for Pokémon 4Ever

Audience Reviews for Pokémon 4Ever