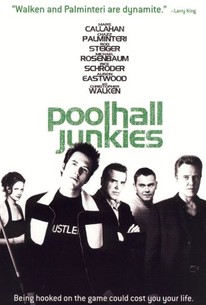 A small-time pool shark with dreams of the big time seeks revenge against the mentor who did him wrong in this drama. Johnny Doyle (Mars Callahan) was a teenaged orphan when Joe (Chazz Palminteri) took him under his wing and taught him everything there is to know about shooting pool. Johnny became a genius with a cue, but while he dreamed of becoming a respected professional billiards player, Joe preferred to keep him working along the lower rungs of pool hustling. When Johnny learns just how far Joe has gone to keep him down, Johnny breaks away from him, but Joe and his thugs take revenge against Johnny by breaking his wrists. Tara (Alison Eastwood), Johnny's upper-crust girlfriend, urges him to get out of the pool racket, and Johnny grudgingly agrees, though he feels empty without the excitement of the table. Johnny renews ties with his younger brother Danny (Michael Rosenbaum), and begins to fear he's going to fall into the same sort of traps that snared him -- especially when he finds out that Joe has his eyes on Danny. Johnny decides to give pool playing another go, and teams up with Mike (Christopher Walken), who bankrolls hustlers and would like to take Joe down a notch or two. But Joe has found a new player, Brad (Rick Schroder), whose talent rivals Johnny's, and he's not sure if he knows a way to beat him on the green felt. Poolhall Junkies also features Rod Steiger in one of his final roles; the film didn't see theatrical release until nearly nine months after his death. ~ Mark Deming, Rovi