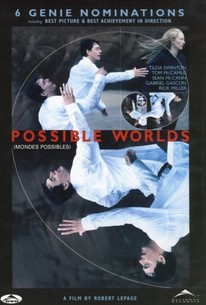 A man moves across space and time to do the right thing for the woman he loves in this sci-fi-tinged fantasy thriller. George (Tom McCamus) is a man who possesses an unusual level of awareness -- he not only understands that people exist in parallel worlds at once, but also is able to experience several of his alternate lives at once, even remembering what happened on one plane of existence while functioning in another. This is as much of a curse as a blessing for George; his wife Joyce (Tilda Swinton) was murdered in one life, and he finds himself thrown from one life to another, in which he encounters Joyce's other lives while he searches for her killer. As we're introduced to George, he's been murdered and his brain has been removed from his body; Berkley (Sean McCann), a veteran police detective, is assigned to investigate the killing with his less experienced partner, Williams (Rick Miller). Berkley and Williams are eventually led to a laboratory run by an eccentric scientist who performs odd experiments on animal brains and studies the effects of sensory deprivation. Meanwhile, George still lives in another parallel world, where he meets Joyce again -- not once, but twice. Possible Worlds was based on the play by John Mighton, who also wrote the film's screenplay.