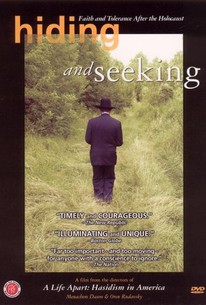 Members of a family try to bridge their differences as they address different interpretations of Judaism in this emotionally powerful documentary. Menachem Daum is a devout Jew, as is his wife, Rivka Daum. During World War II, Rivka's father survived the Holocaust thanks to a Polish family who hid him from Nazi troops in their home, and Rivka and Menachem have planned a trip to Eastern Europe in order to find and meet the Poles who saved her father's life. The couple have two grown sons, whom they wish would join them for the trip; both are Orthodox Jews living in Jerusalem and studying in yeshiva. While Menachem is proud of his sons' faith, he also believes they have set themselves apart from the real world, and fears they've used their devotion as a wall rather than a bridge. Eventually, the two sons join their parents on their journey, and both the parents and their children gain valuable perspectives on one another's points-of-view, especially after meeting the family of heroic Poles. Hiding and Seeking: Faith and Tolerance After The Holocaust was shown in competition at the 2002 San Francisco Jewish Film Festival.

There are no featured audience reviews for POV at this time.