Princess of the Row 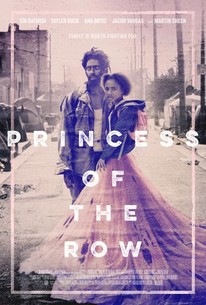 Princess of the Row

Princess of the Row Photos

Bouncing around the sometimes-abusive foster care system, a creative 12-year-old girl Alicia Willis (Tayler Buck), ditches school to visit her military veteran father Sgt. Beaumont "Bo" Willis (Edi Gathegi). After a battle-induced brain injury during his service in Iraq, Bo is now homeless and living on LA's skid row suffering from severe PTSD. The injury renders him unable to recognize his own daughter most of the time but to Alicia it doesn't matter, because she remembers him as the father he used to be: a caring man with a love of storytelling. Inheriting her father's creativity Alicia loves to write and spends most of her time writing fantasy tales of a Princess on a quest. But when Alicia's social worker Magdalene (Ana Ortiz) places her in a perfect home with an award-winning writer John Austin (Martin Sheen), she learns they live 10 hours away. Fearful of never seeing her father again, Alicia escapes the city with her father on a mission to find a better life where they can be together in peace. PRINCESS OF THE ROW is an inspiring tale about the powerful bond between father and daughter, embodying the message that family is always worth fighting for.

Critic Reviews for Princess of the Row

Audience Reviews for Princess of the Row

There are no featured audience reviews for Princess of the Row at this time.

Princess of the Row Quotes