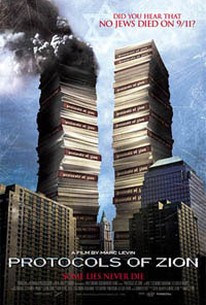 Levin takes viewers on a personal journey, laying bare the ugly and varied faces of anti-Semitism.

Near the dawn of the 20th century, underlings of Czar Nicholas II created a book called The Protocols of the Elders of Zion, which purported to be the outline of a master plan created by powerful Jews determined to rule the world. First published in 1903, the essay was a hoax (and was revealed as such for the first time in 1921 by the London Times), but that hasn't prevented it from having a long and troubling life as a widely distributed cornerstone of anti-Semitic hate literature; it's still in print around the world, and was adapted for Egyptian television in the new millennium. When filmmaker Marc Levin was confronted with another widely disseminated bit of anti-Jewish propaganda (the false assertion that no Jews died in the World Trade Center attacks of September 11, 2001), he developed a new curiosity about the Protocols and other "factual" sources of anti-Semitic hatred, and set out to find out more about anti-Jewish propaganda. The result was Protocols of Zion, a documentary which offers a surprising (and surprisingly witty) look at figures from the hate movement in America in elsewhere, ranging from leader of the neo-Nazi National Alliance (who also sells Aryan Wear footwear) to an anti-Semitic media analyst who announces that Rupert Murdoch is actually a Jew. The film also examines Henry Ford's well-documented hatred of Jews, anti-Semitism among radical African-Americans, and the memories of Levin's father, a self-described "All-American Jew."

Critic Reviews for Protocols of Zion

Audience Reviews for Protocols of Zion