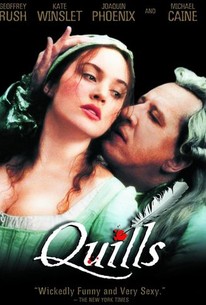 Though hard to watch, this film's disturbing exploration of freedom of expression is both seductive and thought-provoking.

The Marquis de Sade was a man who liked to stir up trouble, at a time when his native France was in a state of tremendous political turmoil, and this historical drama examines how much controversy he could cause even under repressive circumstances. In the aftermath of the French Revolution, the Marquis de Sade (Geoffrey Rush) manages to narrowly escape execution during the Reign of Terror, and instead is sentenced to the Charenton Asylum for the Insane. Coulmier (Joaquin Phoenix), the priest who heads the asylum, is sympathetic to the political machinations that have put the Marquis in his care, and allows him not only to write what he pleases, but to stage theater pieces using the other patients as actors. Royer-Collard (Michael Caine), a tyrannical doctor overseeing the mental institutions of Napoleonic France, is as outraged as the emperor when he reads Justine, a scabrous volume the Marquis penned while an inmate at Charenton, and he demands that de Sade be stopped. But Royer-Collard soon learns that stopping the Marquis from writing is not so simple; when de Sade's quills and ink are taken from him, he uses wine and even his own blood to write his stories. When these options are no longer available, he dictates his work with the help of Madeline (Kate Winslet), a laundry girl working at the asylum, who is fascinated by the notorious de Sade, though she declines his frequent requests to satisfy his notorious sexual appetites. Based on the play by Doug Wright (who also penned the screenplay), Quills was directed by Philip Kaufman, who previously documented the line between eroticism and literature in Henry and June and The Unbearable Lightness of Being. ~ Mark Deming, Rovi

Tom Ward
as The Horseman

Lisa B. Hammond
as Prostitute

Jamie Beddard
as Lunatic at Play
View All