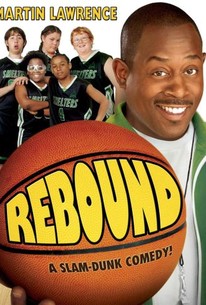 Rebound ought to entertain its target audience, but there's nothing here for those who've seen The Bad News Bears or its countless derivatives.

A man hoping to make his way back to the big time starts by heading back to middle school in this comedy. Roy McCormick (Martin Lawrence) is one of the most successful coaches in college basketball, but he's just as famous for his hair-trigger temper as he is for molding winning teams. When an outburst of anger during a game escalates into an embarrassing public indecent, McCormick loses his job and is banned from college sports. Looking for a way to rehabilitate his image, McCormick takes a job coaching the basketball team at the middle school he used to attend, only to discover his players are a handful of misfits and losers with no skill on the court. Can McCormick mold the kids into a winning team -- and make himself into a better man along the way? Rebound also stars Wendy R. Robinson, Breckin Meyer, Horatio Sanz, Megan Mullally, and Patrick Warburton.

Eddy Martin
as One Love

Beau Billingslea
as NCBA Board Member

Stacey Ford-Waters
as Opposing Player No. 1

Jack K. Haley
as Announcer No. 1

Barry Hochberg
as Announcer No. 2

Angela Oh
as Female Reporter No. 2

Critical Consensus: "Crank" Is Well-Ranked; "Illusionist" Is Magic, "Crossover" Is An Air-Ball, "Wicker Man" Gets Burned
Summer Tomatometer Wrap-up #4: The Worst of the Summer
Critical Consensus: Critics Do the "Hustle," Escape "Island" and "Bears"
View All