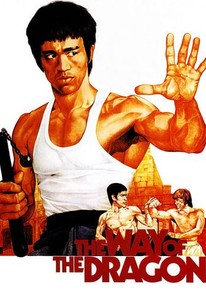 Bruce Lee's pre-Enter the Dragon outing is a surprising change of pace from his usual hard-hitting action fare because it favors humor as much as it does kung-fu. It's also notable because it represents Lee's only venture as a director. For the most part, Return of the Dragon works thanks to its charismatic star. Lee shows great comic timing in the humorous set pieces in addition to the usual physical prowess he displays during the action scenes. He also manages to utilize both skills at once on occasion, the best example being a scene where he squares off with a group of mobster goons at a restaurant. It also benefits from its picturesque Italian setting (a novel location for a kung-fu film) and an impressive fight finale between Lee and Chuck Norris (making his film debut). On the down side, the film's low-budget shows and the other performers all pretty much pale in comparison to Lee. However, the real flaw with Return of the Dragon lies in its ending, which features a last-minute twist that doesn't work because it is too unexpectedly tragic for a film that had previously been so lighthearted. Despite this misstep, it remains a likeable blend of kung-fu and comedy that is likely to bring a smile to the face of Bruce Lee fans. ~ Donald Guarisco, Rovi