Return to House on Haunted Hill 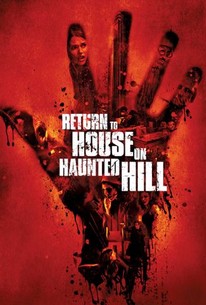 Return to House on Haunted Hill

When the lone survivor of the original excursion to The House on Haunted Hill dies under suspicious circumstances, her sister returns to the foreboding mansion to solve the mystery of her sibling's death in the feature directorial debut of former make-up special effects artist Victor Garcia (Hellboy). Back in 1931, malevolent doctor Richard Vannacut and his entire staff at the hilltop asylum were killed when the patients revolted and set the institution ablaze. Ever since then, rumors have persisted that the spirits of those consumed in the inferno still haunt the hospital. Those rumors seemed to be confirmed when, in 1999, billionaire Steven H. Price and his guests were viciously slaughtered in the refurbished mansion. Though the authorities officially blamed Price himself for the gruesome massacre, survivor Sarah Wolfe insists that there was indeed a supernatural element at play. Now, eight years have passed since that fateful night, and Sarah's sister Ariel - a successful editor at a popular men's fashion magazine - has just received word that Sarah has committed suicide. Immediately sensing foul play, Ariel's suspicions are confirmed when a strange book arrives in the mail shortly thereafter. Sent by Sarah just before she died, the book proves to be Vannacut's personal diary. According to the diary, which Ariel manages to translate with a little help from archeologist Richard Hammer, an ancient Baphomet idol is hidden somewhere deep within the sprawling estate. In her last days, Sarah had become convinced that the idol was the source of the house's evil. Richard, too, shares this belief, and with the help of graduate students Michelle and Kyle he is determined to find the idol. But Ariel isn't about to go on a ghost hunt in the same mansion where so may atrocities have occurred, at least not until she is kidnapped by Desmond Niles and his vicious band of mercenaries. They too seek the Baphomet idol, and they too will soon discover why few people who venture into the former asylum ever come out alive. ~ Jason Buchanan, Rovi

Georgi Zlatarev
as Malcolm
View All

Critic Reviews for Return to House on Haunted Hill

Audience Reviews for Return to House on Haunted Hill