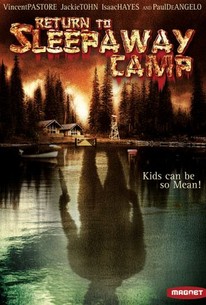 Two decades after Angela Baker's bloody murder spree at Camp Arawak, Camp Manabe begins to experience a rash of killings that leads one of the owners to recall the gruesome horrors of the past. It's summer at Camp Manabe, and that means that the counselors are doing as little as possible to keep track of their young charges while the kids gleefully torment one another at every possible turn. But while self-serving camp owner Frank (Vincent Pastore) and junior partner Ronnie (Paul DeAngelo) strive to maintain some semblance of control over their campground, things suddenly take a terrifying turn for the worse when the mutilated corpses of young campers and counselors begin turning up all over the grounds. Reflecting on the murders that plagued Camp Arawak when he was an employee there two decades ago, paranoid Ronnie begins compiling an ever-growing list of suspects. Could a member of the staff be responsible for such atrocities, or could former Camp Arawak employee Ricky (Jonathan Tiersten) - who curiously still works nearby - be to blame for the latest round of summertime slaughter? Sure the kids at Camp Manabe have always maintained a reputation for being cruel, but does that really mean that they're capable of murder? Original Sleepaway Camp writer/director Robert Hiltzik reunites with that film's star Felissa Rose for this belated sequel featuring all of the trash-talking thrills and creative kills that has made the long-running series a hit with horror fans everywhere.

Michael Gibney
as Alan
View All