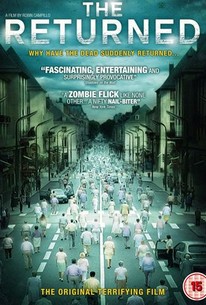 They Came Back Ratings & Reviews Explanation

They Came Back Photos

The recently dead return to life in They Came Back, but they are surprisingly uninterested in feasting on the living. Many of them are, naturally enough, elderly, and they seem content merely to go back to their former lives, but their return causes a myriad of complications. Robin Campillo, making his feature directorial debut, co-wrote the script to Laurent Cantet's Time Out, and his "zombie" movie quietly examines the individual and societal impact the dead have on the small French city -- just one of many similarly afflicted throughout the world -- to which they return. Isham (Djemel Barek) and Véronique (Marie Matheron) have their trepidations, but they're generally happy, at first, to see their little boy Sylvain (Saady Delas), and the town's elderly mayor (Victor Garrivier) welcomes home his wife, Martha (Catherine Samie). But Rachel (Géraldine Pailhas of 5x2), a government health official, cannot bring herself to visit her newly returned husband, Mathieu (Jonathan Zaccaï of Seaside), at the ad-hoc shelter where the government houses the "zombies" like refugees. Eventually, she relents, and Mathieu returns home, but the living find that their loved ones are not exactly as they remember them. Studies soon reveal that the dead suffer from a form of aphasia. They cannot create new memories, and they cannot be trusted to perform any but the most menial tasks. Perhaps sensing the discomfort they cause the living, the dead gather together at night, and seem to be formulating some kind of secret plan. They Came Back was selected by the Museum of Modern Art and the Film Society of Lincoln Center for inclusion in the 2005 edition of New Directors/New Films.

Frédéric Pierrot
as Gardet
View All

Critic Reviews for They Came Back

Audience Reviews for They Came Back

They Came Back Quotes