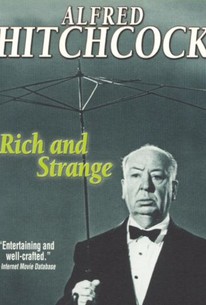 This atypical Alfred Hitchcock effort is a cautionary fable which lends credence to the old saw "Love flies out the door when money flies in the window." Joan Barry and Henry Kendall play a young married couple who suddenly come into an inheritance. Bored with their working-class existence, hero and heroine embark upon a world cruise, and it isn't long before Barry gets romantically involved with a landed-gentry gentleman. Meanwhile, Kendall is swept off his feet by a phony princess, who tricks him out of all his money. Broke and miserable, Barry and Kendall head home on a shabby cargo boat, only to find themselves in the middle of a shipwreck. The couple is rescued by a Chinese junk, where the solemn crew members dine on their pet cat. By the time Barry and Kendall have returned to their humble suburban lodgings, they've both learned the sagacity of remaining in their own back yard. Partly a sophisticated sex comedy, partly a grim seafaring melodrama, Rich and Strange had the negative effect of confusing the public in general and Hitchcock's fans in particular, and as a result the film, which remains one of Hitch's best early talkies, died at the box office.

Betty Amann
as The Princess

Aubrey Dexter
as Colonel
View All

Critic Reviews for Rich and Strange

Audience Reviews for Rich and Strange