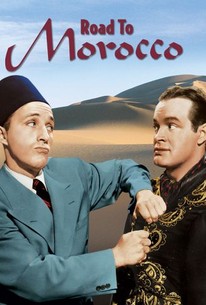 Having accidentally caused a merchant ship to blow up, stowaways Bob Hope and Bing Crosby are shipwrecked on the African coast. Commandeering a convenient camel (who takes time to ad-lib a spit in Hope's eye!), Bob and Bing are off on the road to Morocco, an event they celebrate in song. With nary a penny in their pockets, the boys try various methods to scare up a meal. Old reliable Bing shows up with the necessary funds; when Bob asks where the money came from, Bing calmly informs his pal that he's been sold into slavery. Bob is dragged off to parts unknown; later, Bing, his conscience bothering him, scours the town in search of his buddy. He stumbles into a luxurious palace, where Bob is being treated like a rajah. Even more puzzling, Bob is being kissed and cosseted by Moroccan-princess Dorothy Lamour, who announces plans to marry him in a few days! Neither Bing nor Bob can figure this out, but the audience knows that Dorothy has been advised by her astrologers that her first husband will suffer a violent death, and that her second marriage will be long and happy. Since Dorothy is affianced to desert sheik Anthony Quinn, ol' buddy Bob is once more set up as a dead duck. But Dorothy finds herself attracted to Bing, and forgets all about her pre-arranged marriage to Quinn (just as well, since Quinn is the heavy of the piece). On the eve of the wedding, the astrologers find they've made a mistake, and that Dorothy is now free to marry the man of her dreams-who, by this time, is Bing. Bob must console himself with handmaiden Dona Drake, who's some looker herself. As the wedding procession proceeds, Quinn comes riding into town, kidnaps Dorothy, and leaves Bob and Bing trussed up in the desert. Freeing themselves, Bob and Bing make their way through the desert wastes ("This must be where they empty the old hourglasses") in search of Quinn's camp. After an amusing series of mirages, the boys sneak into camp and attempt to rescue Dorothy and Dona. Imprisoned by Quinn, the boys muff an opportunity to use a magic ring, but still manage to escape. Using exploding cigars and hotfoots, our heroes sabotage a peace conference between Quinn and rival sheik George Givot, prompting a talking camel to remark "This is the screwiest picture I've ever been in." Bob, Bing and the girls escape to New York, but not before Crosby spoils Hope's chances at getting an Academy Award by interrupting Bob's "mad scene." Generally regarded as the best of the "Road" pictures, Road to Morocco is as fresh and funny today as it was back in 1942; even in repeated viewings, the rapid-fire one liners and comic setpieces result in boffo bellylaughs. An Oscar was bestowed upon Johnny Burke and Jimmy Van Heusen's ballad "Moonlight Becomes You".

Dick Botiller
as Warrior
View All

Critic Reviews for Road to Morocco

Audience Reviews for Road to Morocco