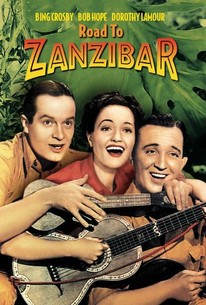 The second Bing Crosby/Bob Hope "Road" picture casts Crosby as a penny-ante sideshow promoter and Hope as Crosby's only client, "Fearless Frazier." Under Crosby's tutelage, Hope has been shot from a cannon, zapped in an electric chair and nearly strangled by an octopus. Now they're practically broke and stranded on the African coast. Crosby spends the last of their money to spring helpless Dorothy Lamour from a native slave market. Actually, Lamour and her pal Una Merkel are scamming Crosby and Hope to finance a safari across Africa, so that Lamour can link up with her wealthy fiance in Zanzibar. En route through the deepest, darkest jungle, both Hope and Crosby fall in love with Lamour. But when they find out they're being taken for chumps, the boys leave the safari and strike out on their own. Captured by cannibals, the boys try and fail to win their freedom by having Hope wrestle a particularly grumpy gorilla. Making their escape after teaching the natives their time-honored "Patty Cake" routine, they head for Zanzibar. Once again, Crosby spends his ready money to spring Lamour from her captured-by-slavers con game, obliging Hope, Crosby, Lamour and Merkel to try to earn passage money home by staging a "sawing the lady in half" routine for the locals. Crosby: "Are you sure you know what you're doing?" Hope: "If I don't, one of us is going back half fare." Like the earlier Road to Singapore, Road to Zanzibar sticks too closely to the script and plot to allow those inveterate adlibbers Hope and Crosby free reign. Still, there are some choice moments: our favorite bit occurs when Crosby comments to Lamour on the artificiality of movie musicals--whereupon the sound of an orchestra pops up out of nowhere.

James B. Carson
as Waiter

Charles Gemora
as Aqua the Gorilla

Critic Reviews for Road to Zanzibar

Audience Reviews for Road to Zanzibar