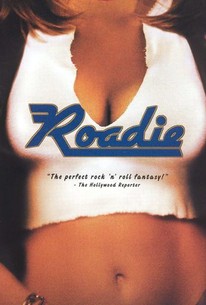 Roadie is a showbiz saga about the working slobs who make live pop-music performances happen. Texas good ol' boy Travis W. Redfish (pop singer Meat Loaf) drives a Shiner beer truck on his appointed rounds, but he becomes smitten with rock groupie Lola Bouillabase (Kaki Hunter), a "roadie" whose sole ambition in life is to bed her idol, Alice Cooper (playing himself). Travis' grizzled pappy, Corpus C. Redfish (Art Carney), feels disgusted by his son's lifestyle. After hearing that Cooper and his band are on tour, Lola sets out to catch up to them and offer her services, with Travis in pursuit. Along the way, they meet a number of pop-music stars -- Blondie, Asleep at the Wheel, Hank Williams Jr., Roy Orbison, and Ramblin' Jack Elliott -- who are all working on their own tours. Travis signs on, himself, as a groupie for a rock band, and is quickly dubbed "greatest roadie of all time," but he soon realizes that he must return to Texas for the wedding of his sister and his best friend.

Alice Cooper
as Himself

Deborah Harry
as Herself

Roy Orbison
as Himself

Hank Williams Jr.
as Himself

Ramblin' Jack Elliott
as Himself

Merle Kilgore
as Himself

Ray Benson
as Himself

Sheryl Cooper
as Herself

Alvin Crow
as Himself

Ramblin' Jack Elliot
as Himself

Chris Stein
as Himself

Clem Burke
as Himself

Jimmy Destri
as Himself

Nigel Harrison
as Himself

Frank Infante
as Himself
View All