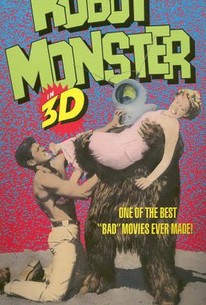 Robot Monster may well be the worst science fiction film ever made (Plan 9 From Outer Space is its main competition for that dubious honor), but that doesn't mean that it isn't fun to watch. Filmed in an eye-straining 3D process, this curious melange takes place in a post-apocalyptic world. Evidently, there are only six people left on earth: little Johnny (Gregory Moffett), his sisters Alice (Claudia Barrett) and Carla (Pamela Paulson), his widowed mother (Selena Royle), his supposed father the Professor (John Mylong) and the prof's assistant Roy (George Nader). As the survivors wander around Bronson Canyon, the Professor comes to the conclusion that the rest of the world has been wiped out by a "calcinator death ray," wielded by an army of creatures from the planet Ro-Man. The invaders are supposed to be killer robots, but they look more like gorillas in diving helmets (that's because gorilla impersonator George Barrows supplied his own monkey suit when the robot costumes proved too expensive to build). Ordered to kill the six survivors, the head Ro-Man balks when he (it?) falls in love with Alice. The tenor of the film can best be captured by this vignette from Ro-Man's main soliloquy: "To be like human! To laugh! Feel! Want! Why are these things not in the plan? ... I cannot -- yet I must. How do you calculate that? At what point on the graph do 'must' and 'cannot' meet?" And don't forget Ro-Man's "intergalactic table": a ham radio that blows bubbles. Robot Monster is a must-see for any and all devotees of truly bad cinema.

John Mylong
as The Professor