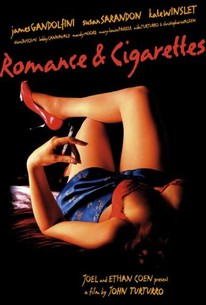 This movie musical aims for fun and modern, but Romance and Cigarettes is too scattered and uneven to achieve either.

Nick is a New York ironworker married to Kitty, a strong but gentle woman with whom he has three grown daughters. He is secretly carrying on a torrid affair with the flame-haired Tula. When his wife catches him and Tula wants a commitment, Nick finds himself a prisoner of his primal urges. A good man at heart, he must find his way back to his family before he runs of out chances. Drawing on inspirations as diverse as Charles Bukowski and "The Honeymooners," this romantic adventure features songs that are anthems of our time--from James Brown, Janis Joplin, Engelbert Humperdinck, Tom Jones, Bruce Springsteen, and more--which illuminate the characters' hopes and dreams. When pushed to their breaking points (and beyond), these conflicted characters break into song, singing along--sometimes lip-synching, sometimes in full voice--with the music lodged in their subconscious.

Diego Turturro
as Boy on Tricycle

Yianni Digaletos
as The Greek

Robert A. Pennachia
as Fireman

Robert A. Pennacchia
as Fireman

Turturro Paying for His Own Romance & Cigarettes
Critical Consensus: "Because" Is Less Than So-So; "Messengers" Not Screened — Guess The Tomatometer!
SF International Fest Starts Today; "Factotum," "Romance," "Companion" and More!
View All