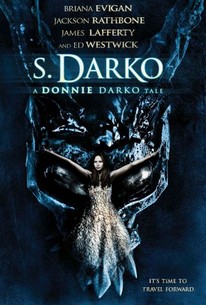 Daveigh Chase reprises her role as Samantha Darko in this sequel set seven years after the events of director Richard Kelly's acclaimed cult hit. The day Donnie Darko died, his family died too. Almost a decade later, eighteen year old Sam still feels the loss every day. She longs to become a professional dancer, and decides to take a road trip to California with her best friend Corey (Briana Evigan). When their car breaks down just outside the dusty small town of Conejo Springs, carefree Corey bides her time waiting for a new water pump to arrive by striking up a friendship with local bad boy Randy Holt (Ed Westwick). The following morning, a meteor crashes to the ground nearby, destroying a local farmer's windmill and leaving a gaping crater in the ground. In the aftermath of that unsettling incident, Sam's disturbing prophetic dreams seem to start spilling over into the real world. Could the people around her prove the key to unlocking this unearthly mystery? Unfortunately for Sam, religious fanatics Trudy Potter (Elizabeth Berkley) and Pastor John Mellit (Matthew Davis) seem more interested in spouting religious clichés that pondering the end of the world, and Randy and the locals are too busy partying to notice that events are coming to a head. When the locals begin to gossip, Sam and Corey's friendship starts to suffer, and the pair have a bitter falling out. Unaware of the fact that they have become inexorably bound by fate to a missing child, an unstable Gulf War veteran, and a mysterious rift in the time-space continuum, the former friends discover that the world will soon perish unless a substantial sacrifice is made. ~ Jason Buchanan, Rovi