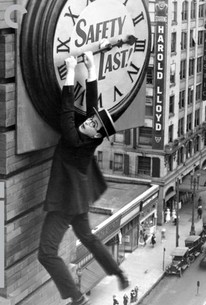 Persuasive enough to give audiences acrophobia when they aren't laughing at Harold Lloyd's antics, Safety Last! is a marvel of visual effects and slapstick comedy.

After Charlie Chaplin and Buster Keaton, the silent film era's "third genius" was Harold Lloyd, who stars in this Horatio Alger-style story of an average country boy trying to make good in the big city. The Boy (Lloyd) leaves his sweetheart, The Girl (Mildred Davis, later the real-life Mrs. Lloyd) in Great Bend while he pursues his fortune in a teeming metropolis. The Boy lands a job as a clerk at a fabric counter of DeVore's, a huge department store, but he lies in his letters home to his beloved, pretending to be the store's manager and spending his earnings on lavish gifts. The Boy's roommate, The Pal (Bill Strother) makes money as a "human fly," performing attention-getting stunts. Promised $1,000 by DeVore's real manager if he can devise a publicity gimmick, The Boy convinces his friend to climb the 12-story establishment and split the winnings with him. On the day of the event, however, The Pal is busy dodging The Law (Noah Young), forcing The Boy to make the arduous climb solo. Dodging a variety of obstacles, The Boy climbs higher and higher, eventually dangling from the store's clock tower, in the film's most memorable image. ~ Karl Williams, Rovi

Harold Lloyd
as The Boy

Mildred Davis
as The Girl

W.B. Clarke
as The Floorwalker

Mrs. Anna Townsend
as The Grandma

Mickey Daniels
as The Kid