The Santa Clause 3: The Escape Clause 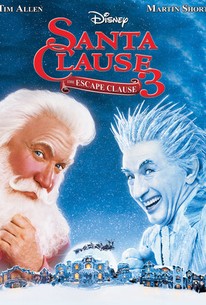 The Santa Clause 3: The Escape Clause

Playing Jack Frost as an evil cross between Liza Minnelli and Liberace, Martin Short is a welcome presence, but this tired series continues drawing from its bag of bland gags and dumb slapstick.

Tim Allen returns as a regular guy-turned-Jolly Old Elf in the second sequel to the 1994 hit The Santa Clause. Scott Calvin (Tim Allen), who doubles as Santa Claus, has settled into his home at the North Pole with his new wife, Carol (Elizabeth Mitchell), and is preparing for another Christmas when he receives a visitor -- Jack Frost (Martin Short), the cold-weather sprite who has been sent to help out St. Nick by Mother Nature (Aisha Tyler) and Father Time (Peter Boyle) after making a scene at a meeting of the Council of Legendary Figures. However, while Jack is supposed to acting as an assistant to Santa, he has a habit of making things go haywire, and as it happens this is no mistake -- Jack is hoping that an exasperated Santa will quit his position so Jack can take over and finally have a holiday he can bend to his will. Meanwhile, Scott has invited Carol's parents, Bud (Alan Arkin) and Sylvia (Ann-Margaret), over for a long-promised visit, but since he needs to keep his other identity a secret, he and his elves are forced to go to great lengths to convince them that they're actually in Northern Canada. Wendy Crewson, Judge Reinhold, and Spencer Breslin also reprise their roles from the first two Santa Clause films. ~ Mark Deming, Rovi

Darian Bryant
as Worker Elf No.2

Cameron Monaghan
as Traffic Cop No.1

Ryan Heinke
as Traffic Cop No.2

Chantel Valdivieso
as Worker Elf No.1

Andrew Vo
as Elf No.4

Alec Plotkin
as Engineer Elf No.1

Sammi Hanratty
as Elf No.1

Ridge Canipe
as Elf No.2

Kate Emerick
as Elf No.3

Eric Plotkin
as Engineer Elf No.2

News & Interviews for The Santa Clause 3: The Escape Clause

20 Fresh Movies and Netflix Originals Streaming in December
The Rock Wants Your Loose Teeth
RT on DVD: Live Free or Hairspray This Thanksgiving
View All

Critic Reviews for The Santa Clause 3: The Escape Clause

Audience Reviews for The Santa Clause 3: The Escape Clause