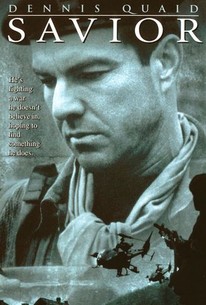 After producer Oliver Stone saw Serbian director Peter Antonijevic's political drama The Little One (1992), he sent him Robert Orr's screenplay, which Orr based on the true story of an American mercenary in Bosnia. Orr had been a photographer's assistant during the war. Thus, Antonijevic directed the first 100% American-funded film about the Yugoslav conflict, beginning with a Paris prologue: Former U.S. military official Joshua (Dennis Quaid) entered the Foreign Legion after his wife (Nastassja Kinski) was killed in Paris by Muslim fundamentalists. Six years later, in Bosnia during 1993, Joshua and his pal Peter (Stellan Skarsgard), fight together on the Serbian side. After Peter dies from a grenade tossed by a young girl, Joshua shoots another youth on the side of the enemy. In a prisoner exchange, psycho Serb Goran (Sergej Trifunovic), a Muslim-hater, and Joshua wind up with pregnant Vera (Natasa Ninkovic), victim of a Muslim rape. When Goran threatens to shoot her baby, Joshua kills Goran. After Vera rejects the child, her family turns against her, and Joshua drives mother and child to a refugee center. Eventually, Joshua attempts to get Vera and her baby out of the country, but they encounter death-dealing Croatian marauders. Filmed in Montenegro, Savior was shown at the 1998 Cannes Film Festival and the 1998 Sochi Film Festival.

Vesna Trivalic
as Woman On Bus

Kosta Andrejevic
as Boy on Bridge

Sanja Zogovic
as Girl on Bridge

Cedo Dragovic
as Driver
View All