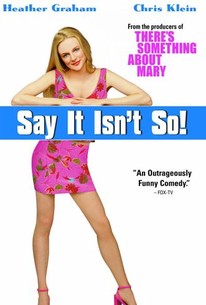 Say It Isn't So

Those that haven't tired from Farrelly brothers' brand of comedy may still find some laughs here. Otherwise, the slow pacing and unimaginative shock gags will start to wear on the viewer.

Say It Isn't So Photos

Bobby Farrelly and brother Peter Farrelly continue exploring outrageous premises with this comedy directed by their first assistant director J.B. Rogers. In this wacky spin on the boy-meets-girl tale, Gilly Noble (Chris Klein) enters a sexually charged, passionate love affair with girl of his dreams Jo Wingfield (Heather Graham). After a happy time together, they soon realize that they are brother and sister and quickly break it off. Jo begins a new life elsewhere and Gilly is left heartbroken -- until he learns that Jo is not actually his sister; the incest suggestion was in fact a lie begun by a meddlesome third party. As Gilly travels to meet up with his beloved, he finds out that Jo is engaged to be married to another man; he must put a stop to it, even while everyone still believes he is Jo's sibling and is committing an unnatural act. Say It Isn't So also features Sally Field, Orlando Jones, and Farrelly stalwarts Richard Jenkins and Lin Shaye. ~ Jason Clark, Rovi

Suzanne Somers
as Herself

Rick Poltaruk
as Man in Room

Joyce Erickson
as Old Lady No. 1

Alex Green
as Old Lady No. 2

Mary McDonald
as Old Lady No. 3

Norman Armour
as Heckler No. 1

Daniel Boileau
as Heckler No. 2

Keith Dallas
as Heckler No. 3

Rain Draper
as Heckler No. 5

Alejandro Abellan
as Mexican Man: US

Kate Robbins
as Elderly Woman No. 1

Gina Stockdale
as Elderly Woman No. 2

R. Nelson Brown
as Inmate No. 1

Marcus Hondro
as Inmate No. 2

Pablo Coffey
as Inamte No. 3

Shawn Bordoff
as Inmate No. 6

Mark Olea
as Man in Alley

News & Interviews for Say It Isn't So

Critic Reviews for Say It Isn't So

Audience Reviews for Say It Isn't So

Say It Isn't So Quotes