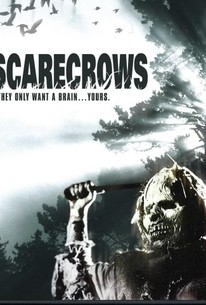 A suspenseful and chilling exercise in supernatural horror, this film opens with some speedy exposition during a mood-setting opening credits sequence, inter-cut with radio news reports of a violent paramilitary-style robbery on the Camp Pendleton payroll carried off by a thuggish team of commandos. Making their escape by hijacking a cargo plane -- along with its pilot and his teenage daughter -- the robbers are betrayed by one of their own number, Bert (B.J. Turner), who parachutes with the crate of stolen loot over a Florida cornfield. The team makes a landing in the same field, filled with eerie scarecrow effigies, and begins to sweep the area in search of their defector, working their way toward an abandoned farmhouse. Once there, the team members find themselves cut off from their means of escape by a band of living scarecrows, who stalk and kill the commandos one by one, gutting them and stuffing their bodies with straw; the victims then return to life as scarecrows themselves, joining their undead comrades and closing in on the rapidly dwindling group of survivors. Tightly paced and consistently tense, this low-budget film has slick production values (making it appear more expensive than it probably was) and only falters in some laughably overwrought performances. Taking a cue from Night of the Living Dead, director William Wesley eschews any definite explanation for the supernatural goings-on, instead relying on a nightmare logic that adds to the paranoid atmosphere.

Dax Vernon
as Dax, the Dog

Howard E. Haller
as Helicoptor Pilot / Base (voice)
View All