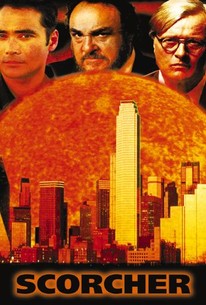 Take a deep breath. Renegade soldier Col. Ryan Beckett (Mark Dacascos) is called in by the President of the United States (Rutger Hauer) to save the planet from imminent destruction after Chinese nuclear testing accidentally loosens the subterranean plates and exposes the Earth's core, which threatens to bring "Hell on Earth" in just three days. Beckett assembles a crack team to deliver and detonate not one but two nuclear bombs that must go off simultaneously in the only place on the planet in which they will do any good at stopping the movement of the plates -- Los Angeles. The city is evacuated in a panic, but Beckett's teen daughter (Rayne Marcus) is abducted by a religious-fanatic pyromaniac and Beckett must save her before he saves the world. Meanwhile, Beckett strikes up a romance with the lovely Julie (Tamara Davies), a scientist on his team who is having a feud with her scientist father (John Rhys-Davies), also on the team. Little do they know that also on the squad is the evil Kellaway (Mark Rolston), who hates Beckett so much he'd let the planet blow up just to kill him.

Beth Riesgraf
as Krissy
View All

There are no featured audience reviews for Scorcher at this time.