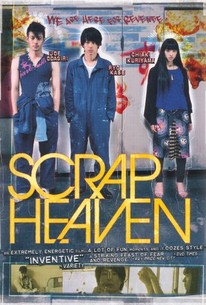 A violent and outrageous revenge comedy with a thoughtful undercurrent, director Lee Sang-il's Scrap Heaven opens with three characters united by fate on the same city bus: toilet cleaner Tetsu (Jô Odagiri); police department administrative assistant Kasuya (Ryo Kase), who wants to work his way up into homicide; and pharmaceutical company employee Saki (Chiaki Kuriyama). The three strangers have ostensibly no connection to one another, save a shared presence on the bus one fateful night -- the night that a political secretary goes completely psychotic and decides to take the three passengers, at random, as hostages. He strong-arms the three into violent and sadistic mind games, including lethal versions of Rock, Paper, Scissors and Russian roulette. The perpetrator inflicts Kasuya with deep-seated psychological scars and shoots Tetsu, pushing the man to the brink of death. The gunman then turns the weapon on himself. Months later, Kasuya meets up with Tetsu once again, and saves him from a potentially lethal act of violence. The two men subsequently join forces and devise a wild plan to set up a revenge-for-hire business, designed to "right wrongs" for victimized persons. In the mean time, Saki is pouring all of her time and energy into the construction of a liquid bomb -- a project that threatens to invite further destruction.

There are no featured audience reviews for Scrap Heaven at this time.