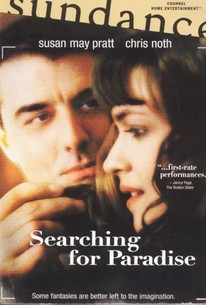 Gilda (Susan May Pratt of Center Stage) is a confused young woman, obsessed with iconoclastic actor Michael De Santis (Chris Noth). She repeatedly watches a tape of De Santis being interviewed by an unctuous, James Lipton-type talk show host (played by legendary indie producer's rep John Pierson). After the death of Gilda's beloved Italian papa (Michele Placido), she learns, much to her dismay, that he had a longtime mistress back in Italy. Using the excuse of her grandfather's (Josef Sommer) upcoming birthday, Gilda travels to New York City, planning to find a way to get close to De Santis. Video camera in hand, Gilda explores the city and runs into Adam (Jeremy Davies), a geology student. Sparks fly until Gilda's newfound cynicism turns Adam off. She decides to pose as a reporter for an Italian newspaper, and arranges to interview De Santis. She takes a bus down to Virginia and goes to the set. Everything goes according to plan, but De Santis quickly sees through her ruse. Intrigued by his pretty, spirited young fan, De Santis invites Gilda back to his hotel room, where neither of them finds what they expected. Searching for Paradise, written and directed by Myra Paci, was developed at the Sundance Institute. The film was a minor hit on the festival circuit and was eventually picked up for home video distribution under the Sundance imprint.

Susan May Pratt
as Gilda Mattei

Critic Reviews for Searching for Paradise

Audience Reviews for Searching for Paradise

There are no featured audience reviews for Searching for Paradise at this time.