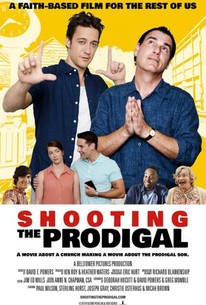 Brother Bob Cross is the gregarious pastor of Eternal Hope Baptist Church in Homer, Alabama. Bob's heart is in the right place, even though his methods might be considered overly aggressive. In his burning desire to reach young folks with the Gospel, he gets the idea to produce a movie. But there's no money, no script, no crew, no cast, and no director. Josh Blume, a nominally Jewish 25-year-old New York Film School student, is close to completing his degree, but just can't seem to find the inspiration to do his final thesis film. His financial benefactor, wealthy widowed Aunt Judith who resides in Homer, wants to get her beloved nephew to finish school and grow up. When Aunt Judith hears of Bob's idea to make a movie, she sees an opportunity: she offers to fund the film if her nephew directs it and fulfills his graduation requirements. Brother Bob realizes that to fulfill his vision, he has to turn over his dream to this brash young outsider. And Josh is forced out of civilized Manhattan into south Alabama to make a Christian movie. He's a fish out of water. As Josh tries to make sense of this strange new world he meets Emily, the preacher's daughter, who wants nothing more than to "get out of Podunk." Josh and Emily quickly realize there's a spark between them. And that adds fuel to the fire for jealous Noah Thatcher, Bob's young associate who's been attracted to Emily since they were in the church's youth group together. The whole congregation joins in playing out suggestions for what kind of movie they should make: a western epic, a Kung Fu action adventure, or a Mobster thriller. Finally the decision is made and production begins on a modern version of Jesus' parable of the prodigal son. But Josh gets resistance from some in the church because of his cast and crew choices... a gay costume designer, an African-American cameraman, and a Muslim who's cast in the role of the "God-like" father character. Josh and Brother Bob struggle to find common ground and work together, while the church board bristles at the presence of so many "undesirables" in their comfortable Christian community, and jealous Noah tries to sabotage the budding relationship between Josh and Emily. With all the obstacles and distractions, will Josh stick with it long enough to actually deliver a first-rate film? Can Brother Bob and his church find the true meaning in the story of the prodigal and realize that acceptance is the key to God's grace? Just when it appears that everything is coming together, tragedy strikes and the whole project is in jeopardy. It looks like the movie's going to have to be shut down for good. But a surprising inspiration and an unexpected hero saves the day.

Critic Reviews for Shooting the Prodigal

There are no critic reviews yet for Shooting the Prodigal. Keep checking Rotten Tomatoes for updates!

Audience Reviews for Shooting the Prodigal

There are no featured audience reviews for Shooting the Prodigal at this time.