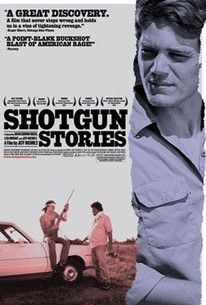 Thanks to a talented cast and its uncommon depth, Nichols' debut manages to rise above its overly familiar plot.

Two families linked by the same father explode into a violent rivalry in this independent Southern gothic drama, the first feature from director Jeff Nichols. Cleaman Hayes lived and died in Little Rock, AR, where he had seven sons by two different women. After wedding Nicole (Natalie Canerday), Cleaman sired three sons, and his lack of concern for their future was reflected in the fact he barely gave them names -- they were dubbed Son (Michael Shannon), Kid (Barlow Jacobs) and Boy (Douglas Ligon). One day, Cleaman abandoned his wife and sons, and left them to survive in deep poverty that has trapped them to this day. Eventually Cleaman cleaned up his act, launched a successful business, married again, and raised four more sons -- Cleaman Jr. (Michael Abbott, Jr.), Mark (Travis Smith), Stephen (Lynsee Provence) and John (David Rhodes), all of whom were given the love and attention Cleaman denied his first three children. When Cleaman dies, all seven sons attend the funeral, and Son, overcome by bitterness, spits on his father's coffin and tells everyone how much he hated the man. Short tempered Mark answers Son with his fists, and a free-for-all breaks out between the two Hayes families. The anger and rivalry doesn't end at the end of the day, and soon a war has broken out between the clans, with no small amount of blood shed on either side. Shotgun Stories received its North American premiere at the 2007 Tribeca Film Festival. ~ Mark Deming, Rovi

Brian Sides
as Man at Bar