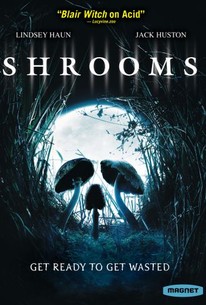 Five American college students experience a particularly bad trip while vacationing in Ireland and partaking of the local hallucinogenic fungi in director Paddy Breathnach's tripped-out tale of sex, drugs, and slashers. Upon arriving in Ireland to go camping with their old college buddy Jake, Americans Tara, Troy, Holly, Bluto, and Lisa and their host eagerly set out into the wilderness in search of some magic mushrooms. As the trip starts to take hold and the group gathers around the campfire, Tara begins to wonder if she took too strong of a dose after Bluto goes missing, and she feels as if she's somehow witnessed his death. When other members of the group go missing as well, it begins to appear that someone is stalking the group and taking murderous advantage of their altered state. Could it be that this is just a simple case of hallucinogenic panic, or is there an element of truth to Jake's troubling stories of mutilated bodies and unsolved murders in the Irish countryside? The only way to be certain is for Tara to fight for her life and try to maintain her sanity until the morning sun rises and the reality returns.

André Pollack
as The Dog