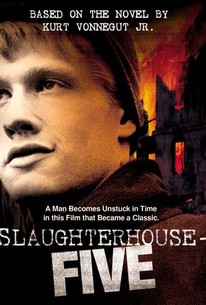 "Billy Pilgrim has come unstuck in time." These opening words of Kurt Vonnegut's famous novel make an effective and short summary of a haunting, funny film. For the screen, director George Roy Hill faithfully renders Vonnegut's black anti-war comedy about Pilgrim (well played in a low key by Michael Sacks), who survives the horrendous 1945 fire bombing of Dresden then lives simultaneously in his past as a naïve American POW and in the future as a well-cared-for zoo resident on the planet Tralfamadore (with zaftig Valerie Perrine as his mate). In the present, he's a middle-aged optometrist in Ilium, NY. If this sounds like a bit of a jumble -- it is. But viewers willing to watch carefully will find the movie as intricate and harmonious as Glenn Gould's plaintive renderings of the Bach keyboard pieces that decorate its soundtrack. It's not essential, but fans who read the short, poetic book will find it a treat in itself, and it will help them appreciate Hill's genius in bringing this "Children's Crusade" to the screen. In addition to Sacks, there are noteworthy performances by Ron Leibman (Norma's union man in Norma Rae) as Pilgrim's crazed nemesis and by radio/TV/movie legend, John Dehner as the arrogant Professor Rumfoord. Hill, of course, came to this film from a big hit, Butch Cassidy and the Sundance Kid, and went on to triumph with The Sting one year later. The elaborate medieval and baroque architecture of pre-bombing Dresden was represented authentically in the film by scenes from Prague, since much of Dresden's architecture was lost to the bombing, and that city, in any case, was deep in East Germany, thus inaccessible at the time of filming. ~ Michael P. Rogers, Rovi

Holly Near
as Barbara

John Wood
as Englishman
View All