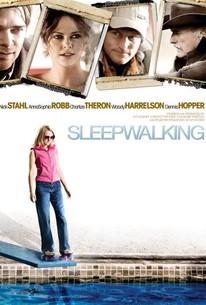 Despite some sharp performances, Sleepwalking suffers from a grimness of tone and sluggish pacing.

Charlize Theron, Woody Harrelson, Dennis Hopper, Nick Stahl, AnnaSophia Robb, and Deborra-Lee Furness star in a family drama detailing the efforts made by an 12-year-old girl to come to terms with her mother's abandonment. Tara's (Robb) mother, Joleen (Theron), just can't seem to get her life together. Her boyfriend has recently been arrested for growing marijuana, and rather than attempting to create a stable living environment for her daughter, Joleen instead places Tara in foster care before vanishing without a trace. Joleen's brother, James (Stahl), isn't exactly the picture of equilibrium, yet he does feel sympathetic toward his niece and obligated to help her though such difficult times. After breaking Tara out of foster care, James and his newly freed niece set out on the open road together. Destination: nowhere. But every road has an end, and before long James and Tara find themselves at James and Joleen's father's farm. James has always avoided thinking about his violent childhood, though he realizes that in order to break the vicious cycle of dysfunction that the family has fallen into he must finally confront the demons of his past. Now, as Tara begins to understand why her missing mother has lived such a tumultuous life, James prepares for the confrontation that could bring his family closer together than ever before, if it doesn't destroy them first. William Maher, who served as visual effects supervisor for the 2005 Sundance film The Chumscrubber, makes his feature directorial debut with a film based on an original screenplay by that film's scribe, Zac Stanford. ~ Jason Buchanan, Rovi

Callum Keith Rennie
as Will