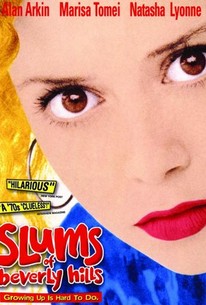 Tamara Jenkins wrote and directed this comedy-drama depicting the experience of growing up poor in the 90210 zip code, told from the point of view of Vivian Abramowitz (Natasha Lyonne), a teen who lives a nomadic existence in the outskirts of Beverly Hills with her single, divorced father, Murray (Alan Arkin) and her two young brothers (David Krumholtz, Eli Marienthal). As Murray tries to keep the family in the Beverly Hills school district, the family moves into a one-bedroom apartment in a shabby complex. When sexually liberated Rita (Marisa Tomei), daughter of Murray's brother Mickey (Carl Reiner), checks out of a drug rehab and moves into the apartment, she becomes a "role model" for the young Vivian. Jenkins's semi-autobiographical screenplay was developed and refined during Screenwriters and Filmmakers Labs sessions at the Sundance Institute. Produced by Robert Redford and Michael Nozik, this film was shown in the Directors Fortnight section at the 1998 Cannes Film Festival. ~ Bhob Stewart, Rovi

Brendan Burns
as Cop in Station

Harris Laskawy
as Charlie the Cook

Jock MacDonald
as Man at Brymans

Rich Willis
as EMS Guy No. 1

Rock Reiser
as EMS Guy No. 2

Sally Schaub
as Waitress
View All