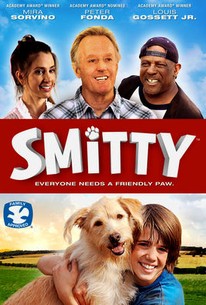 A troubled teen spends the summer on his grandfather's Iowa farm and learns some valuable life lessons from a rescued kennel dog in this affectionate coming of age story featuring Peter Fonda and Louis Gossett, Jr. When the banks foreclose on the farm where Smitty lives, the happy-go-lucky mutt ends up in an Iowa dog shelter. Meanwhile, in the city, 13 year old Ben Barrett (Brandon Taylor Russell) has just been arrested for breaking and entering and grand theft. His mother (Mira Sorvino) at her wits end, Ben is offered the choice of spending three years in juvenile detention, or three months on his grandfather's Jack's farm in Iowa. And no-nonsense Jack (Fonda) isn't about to let his grandson off the hook. Convinced that Ben will adjust more quickly to country life with the help of a friend, Jack goes to the local pound and selects Smitty to keep an eye on his mischievous grandson. Though at first Ben resents the fact that he's suddenly saddled with the responsibility of caring for a dog, a kindly neighbor (Gossett, Jr.) helps to steer the teen down the right path while he reconnects with his family, and learns the importance of responsibility.

Gabrielle Bui
as Tia
View All

There are no featured audience reviews for Smitty at this time.