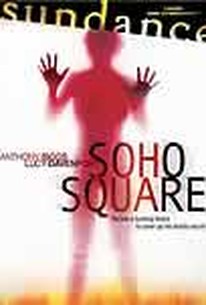 A young detective (Anthony Biggs) battles the demons of his past while chasing a serial killer through London in Jamie Rafn's Soho Square. As the detective and his partner (William Wilde) attempt to track down a psychopath who is murdering women and setting them on fire (not necessarily in that order), we learn through flashbacks that the detective is also dealing with a recent trauma involving his wife (Amanda Haberland). He finds himself fascinated by a local barmaid (Lucy Davenport) who resembles her. Meanwhile, a single mother (Emma Poole) who lives in his building and her precocious little girl, Claudia (Sasha Lowenthal), develop their own interest in the lonely, haunted detective. As the police close in on the killer, and the film jumps back and forth chronologically, it becomes clear that there is an even deeper and more disturbing mystery in play. Rafn wrote, directed, and co-edited Soho Square, his feature debut. It was reportedly produced for about 7,000 dollars, and had its U.S. premiere on the Sundance Channel in 2003. ~ Josh Ralske, Rovi

There are no featured audience reviews for Soho Square at this time.