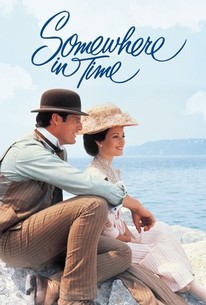 Christopher Reeve got away from Superman and related costume roles in this dramatic fantasy film, adapted from Richard Matheson's 1960s vintage novel Bid Time Return. A young playwright, Richard Collier (Reeve), is approached by an elderly woman on the occasion of his first triumph in 1972 -- all she says to him is "Come back to me" and leaves him with a watch that contains a picture of a ravishing young woman. Eight years later, he visits the Grand Hotel on Mackinac Island and comes upon a photograph of the same woman, whom he discovers was an actress who made an appearance at the hotel in 1912. He becomes obsessed with the image and what the woman -- who died the night she approached him in 1972 -- meant by what she said. In a manner somewhat reminiscent of the film Laura, he falls in love with her and her image as he learns more about her life and career. Then he comes upon the suggestion of a professor at his former college that time travel may, in fact, be possible, using an extreme form of self-hypnosis to free the person from the place they occupy in the time-stream. Collier's feelings for the woman are so strong that he succeeds, bringing himself back to the hotel in 1912 on the eve of her triumph. He meets the actress, Elise McKenna (Jane Seymour), and the two fall in love despite the machinations of her obsessive, autocratic manager (Christopher Plummer), who feels threatened by Collier's presence. ~ Bruce Eder, Rovi

Barbara Giovannini
as Tourist in Hall of History

Don Franklin
as Tourist in Hall of History

Bob Swan
as Stagehand with Note

James P. Dunnigan
as Second Man in Elevator, in 1912

Hayden Jones
as Man with Stage Manager, in 1912

Pat Billingsley
as Professor
View All

News & Interviews for Somewhere in Time

Critic Reviews for Somewhere in Time

Audience Reviews for Somewhere in Time