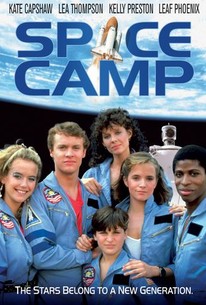 This is an eerily prescient family adventure starring Kate Capshaw as Andie, a frustrated NASA astronaut who's never actually been into outer space. Her husband, flight controller Zach (Tom Skerritt), is sympathetic, but he can't influence her place in the rotation. Andie is assigned to train a group of intelligent high school students at the summer science camp called Space Camp, which is run by NASA and supervised by her husband. There she meets her campers: Kevin (Tate Donovan), a blasé, horny teenager; Tish (Kelly Preston), an airhead with a photographic memory; Kathryn (Lea Thompson), an arrogant pilot; obnoxious youngster Max (Joaquin Phoenix, then billed under the first name Leaf); and scientist-in-training Rudy (Larry B. Scott). While testing the solid booster rockets aboard a real shuttle, the team is blasted into space accidentally. Without enough air, the discordant team pulls together, each discovering hidden talents. The Challenger space shuttle disaster in January 1986 was bizarrely similar to the events depicted in Spacecamp, with far more horrific results. Its release date pushed back several months because of the tragedy, the film was still a painful reminder to the public of the national calamity, and it consequently grossed only about ten million dollars at the box office.

Larry B. Scott
as Rudy Tyler

Daryl Roach
as NASA No. l

Peter Scranton
as NASA No. 2

Rocky Krakoff
as Boy on Rooftop

Terry White
as NASA No. 3

Ron Harris
as Tom the Technician

Kevin Gage
as Counselor No. 2

Jon Steigman
as Bully in Dorm