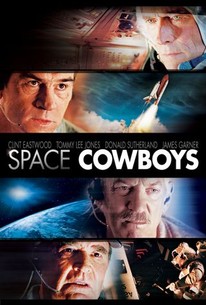 While the plot is overly cliched, the suberb acting by the stars (especially the tense interactions between Clint Eastwood and Tommy Lee Jones) and the spectacular special effects make this a movie worth seeing.

In this adventure drama, four men passed over by the space program get one last chance to be heroes and live out their dreams. Frank Corvin (Clint Eastwood), Hawk Hawkins (Tommy Lee Jones), Jerry O'Neill (Donald Sutherland), and Tank Sullivan (James Garner) were top pilots within an elite Air Force squadron and on the fast track to becoming the first Americans in space in the early 1950s. However, when NASA was established, the pilots were cut out of the loop; Corvin went on to become an aerospace engineer, Hawkins continued on as a freelance pilot, O'Neill became an astrophysicist with a sideline in designing roller coasters, and Sullivan took up preaching as a Baptist minister. Years later, a Russian satellite's guidance system has started to malfunction, and it is expected to crash into the Earth within a matter of weeks. The system is identical to the one Corvin designed for Skylab, so NASA head Bob Gerson (James Cromwell) asks Corvin to help him with the emergency mission to repair the satellite. Corvin agrees under one condition -- that he be sent up to do the repairs himself, with Hawkins, O'Neill, and Sullivan as his crew. Clint Eastwood directed Space Cowboys while also starring as Frank Corvin; his supporting cast includes Marcia Gay Harden, Courtney B. Vance, Loren Dean, and William Devane. ~ Mark Deming, Rovi

Courtney B. Vance
as Roger Hines

Jay Leno
as Himself

Chris Wylde
as Jason
View All