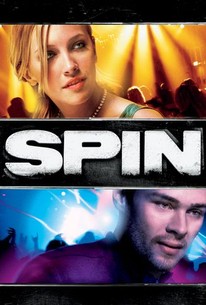 Spin (You Are Here)

Spin (You Are Here) Photos

Love and lust are jockeying for position during one busy night at a hip dance club in this independent comedy-drama. Ryan (Patrick Flueger) is the house DJ at a nightspot in Los Angeles that is enjoying a brief moment as the hippest joint in town. Ryan carries a torch for Cassie (Lauren German), a waitress who is hoping to launch a career as an actress. However, Cassie isn't as strongly attracted to Ryan, and she has no shortage of other potential suitors. As Ryan and Cassie try to sort out their feelings during one busy night, a number of other folks looking either for new love or a new hook-up make their way across the dance floor, including Tony (Michael Biehn), who has been propping up his failing film industry career with some illegal business; crystal meth enthusiast Delaney (Chris Lowell); Mick (Adam Campbell), who works his British charm for all it's worth; and Aubrey (Bijou Phillips) and Apple (Katie Cassidy), who are friends with Cassie and are also struggling to get a break in show biz. You Are Here was the first feature film from writer and director Henry Pincus. ~ Mark Deming, Rovi

Critic Reviews for Spin (You Are Here)

Audience Reviews for Spin (You Are Here)

There are no featured audience reviews for Spin (You Are Here) at this time.

Spin (You Are Here) Quotes